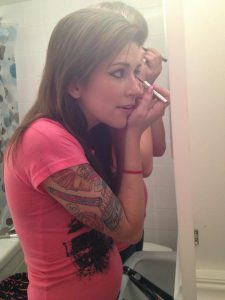 The RCMP in New Brunswick’s Major Crime Unit continues to follow up on tips and information regarding the disappearance of Jami Springer of Moncton who has been missing since August 31, 2016.

“Investigators have spoken to numerous people and followed up on information from the public,” says S/Sgt. Maurice Comeau with Codiac Regional RCMP. “We believe there is someone out there who has information about Jami but has not yet spoken to police because it is very unusual for a person to go missing without someone having knowledge about it.”

Jami Springer’s disappearance is considered to be suspicious as it is unusual for her to be out of contact with her family for such an extended period of time without any reason. Her family is concerned for her well-being, as are our police.

“Our family wants to thank everyone that has helped us try to find Jami,” says Gillian Fletcher, Jami Springer’s mother. “It’s our hope that by adding more money to the Crime Stoppers award, someone with information will call.”

“We want people to know that information can be provided anonymously through Crime Stoppers. You don’t have to give your name,” says RCMP spokesperson Cst. Hans Ouellette. “We are looking for any information that will help us find Jami. Someone knows where she is.”

She was last confirmed to have been seen in the late afternoon of August 31, 2016, on McLaughlin Drive in Moncton.

The RCMP are releasing photos supplied by the family that show some of Jami’s tattoos in hopes that it will help generate additional information. The tattoos include a flower on her upper back, butterfly on her lower back that extends around her waist, a multi-coloured tattoo of a birthday cake, along with other various tattoos on the upper part of her right arm and a red, white and blue popsicle on the inner part of her upper right arm. Jami Springer also has a large tattoo of the Lord’s Prayer that goes the entire length of her thigh on the left leg.

Anyone with information about the whereabouts of Jami Springer, or who may have seen her or spoken to her on August 31, 2016 or any time since, is asked to contact the Codiac Regional RCMP at 506-857-2400. Information can also be provided anonymously through Crime Stoppers by calling 1-800-222-TIPS (8477), or by Secure Web Tips at www.crimenb.ca. There are 3 ways to submit an anonymous tip to Crime Stoppers:
TALK: Call us toll-free 1-800-222-TIPS (8477)
TYPE: www.crimenb.ca/tips or directly at www.crimetip.ca
TAP: Download our P3 Mobile App for Apple™ or Android™ devices